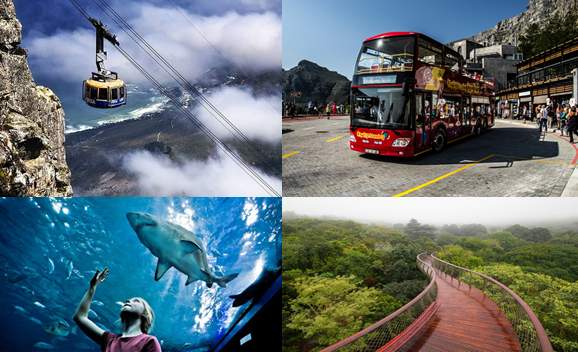 There are few places in South Africa that bear the weight and sheer historical importance of Robben Island, and a trip to the former prison serves as a jarring reminder of country’s troubled political past. At the same time, it reveals itself as a powerful symbol for the triumph of the human spirit, and offers fascinating insight into the reconciliation and resilience that played such a key role in the development of a new South Africa. From the moment you arrive at the humble island, just a short ferry ride from the V&A Waterfront, you’ll feel the impact of this World Heritage Site. A former inmate will guide you while on the island, and you’ll receive unparalleled insight into the significant role that each of the Robben Island’s inmates collectively played throughout apartheid.

Table Mountain Cable Car -Explore One of the new natural wonders of the world
Rising up as a surreal backdrop to all of Cape Town is the extraordinary Table Mountain, and the state of the art Table Mountain Aerial Cableway will whisk you to the top in a picturesque 5-minute ride. Table Mountain is among the most popular attractions in the world, and it is no surprise that it holds the title as one of the New7Wonders of Nature. And while it’s impressive from pretty much anywhere in the City Bowl, including other Big 7 locations of the V&A Waterfront and Robben Island, it’s not until you soar to the top in an exhilarating ride on the cable car, with its rotating floor, that you can truly appreciate its stature, and the incredible city of Cape Town that bustles far below.

V & A Waterfront – There is just so much to do, so much to discover
Long established and proud of a rich heritage, the V&A Waterfront nestled between the Atlantic Ocean and Table Mountain, marches with time, embracing change that brings with it exciting new additions for you to discover. Life on the edge of an historical working harbour in the picturesque city of Cape Town has a charm, and it is with warmth that an invite is extended to you to keep discovering. Indoor shopping and entertainment venues seamlessly merge with outdoor restaurants, ocean vistas and mountain views, and the fresh sea breeze and warm African sun add zest to a cosmopolitan, vibrant atmosphere.

Kirstenbosch National Botanical Garden – The most beautiful garden in Africa
There are few places in the Mother City as tranquil as Kirstenbosch National Botanical Garden, and at least once during your visit, when you stop to catch your breath and absorb the splendour of your surroundings, you’ll wonder how it’s possible that the bustling, buzzing city of Cape Town is just a stone’s throw away. These sprawling, landscaped garden cover 36 hectares on the slopes of Table Mountain, and they blend in so effortlessly and majestically with the natural vegetation that you’d be forgiven for not realising their true scale. And when you consider how much there is to see and do in the garden, from atmospheric sunset concerts and movie screenings, through to guided walks, popular restaurants, and an award-winning treetop walkway, it’s quite likely you’ll be planning your return visit before you’ve even left.